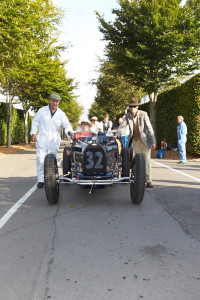 Merrys were delighted to be commissioned by Richard Collier to produce his marketing material for the debut of his Grand Prix Bugatti this years Goodwood Revival. The Team at Merrys produced a very large format canvas banner for the pit garage along with Matt laminated information postcards depicting the car as it appeared at Brooklands in 1932.